The latest news and industry insights for all things Amazon advertising, both for agencies and sellers. Keep in the loop for Amazon search and display stories, as Nozzle helps brands leverage success in the e-commerce world.

Insights sent straight to your inbox

What brands and consumer need to know

The future of business success is digital. New research from Boston Consulting Group (BCG) commissioned by Google found that businesses who adopt data-driven marketing and attribution see up to 30% cost efficiency savings and a 20% increase in revenue.

The market is booming — especially for Amazon. In 2018, Amazon made up 44% of all online retail spend in the US and 5% of all retail. 20.6 million users visited Amazon’s website per month. And Amazon shows no sign of slowing down.

However, there is a dark cloud that is beginning to affect Amazon’s data strategy. It seems consumers have very mixed feelings about Amazon, with one in four having negative feelings when it comes to Amazon's impact on retail and the environment, even if over 20% of those shoppers are buying at least half of what they need on Amazon's site.

With regulators already concerned about the impact of the activities of Amazon, Google and Facebook, Amazon seems to be responding to this by positioning itself as the champion of small businesses on its marketplace. As a result, it is sharing more of its customer data with those Sellers.

At the same time, Amazon is also targeting a new source of revenue — advertising spend. Amazon’s advertising business generated $4.8 billion in revenue during Q4 2019, a 41% increase from the previous year period. The source of this power is customer purchase data, which certainly positions its ad division for growth, and means it will have to share more of this data with advertisers.

As already noted, Amazon is making a strong play regarding its importance to its SME Sellers in a bid to counter the view of it abusing its market dominance. This is also to head off the view that it is using third-party data to benefit its retail operation.

In 2019, Amazon generated $53.7bn in revenue from third-party Sellers, up from $42.7bn in the previous year. Third party retailers also generated 58% of physical gross merchandise sales - so more than its actual retail operation. Revenue which Amazon makes from its Sellers now account for Amazon’s second-largest revenue segment, well ahead of Prime membership and Amazon Web Service cloud revenues.

Amazon accounts for third-party sales on a net basis (how much revenue flows to Amazon as a result), not a gross basis (how much sales goes through the books and is then passed on to the third-parties). So, while third-party sales do make up a majority of sales on its marketplace, Amazon reported $42.75 billion in its own revenue from them last year, compared with $122.99 billion from its own online sales. 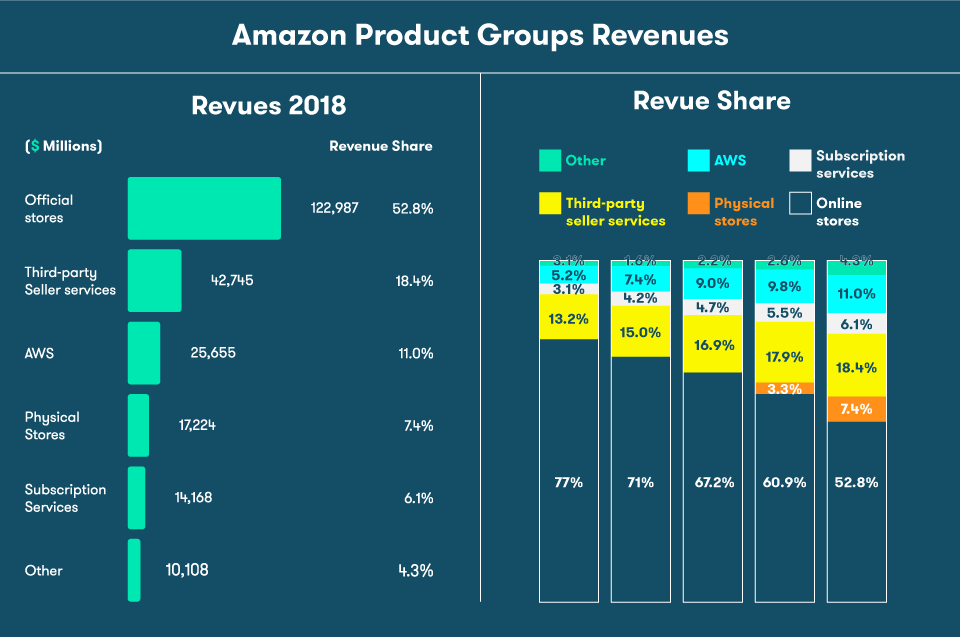 According to a recent Amazon release, small and medium-sized businesses (SME) in the US had a record-breaking year, with more than 15,000 Sellers exceeding $1 million in sales. Nearly 25,000 surpassed $500,000 in sales.

The increase in the importance of third parties to Amazon is driving a sea-change in the way Amazon provides data to those Sellers. Previously, customer data, and the tools to view it, were only really provided to Vendors who sold direct to Amazon, or advertisers who paid large monthly fees for the privilege. From 2018 and through 2019, Amazon started to offer many of these tools, usually for free, to brand registered Sellers and free to brand registered Vendors via Brand Analytics shortly.

Amazon launched a range free tools within the Seller Central portal in 2019 to help Sellers gain richer insights, protect their brands, grow their sales, and delight customers — all based on Amazon data.

Here are some of the tools and services launched in 2019:

Brand owner Sellers enrolled in Brand Registry can use Brand Analytics and the Brand Dashboard to track product performance and access traffic and conversion recommendations. Amazon Sellers viewed the metrics on their Brand Dashboard more than a million times in 2019.

The ethos behind Amazon’s data strategy can be found in Jeff Bezos’ framing a “customer obsession”, saying the firm’s first priority is to “figure out what customers want and what’s important to them”.

Bezos qualifies this by saying Amazon must not violate people’s trust in the process. This is the key to Amazon’s shifting data strategy. As the company continues to grow, and expand into new activities, it’s under intense scrutiny to keep its data obsession in check. This will be increasingly difficult, given the success of Amazon Prime and the data this allows Amazon to collect.

Amazon has 150 million people paying $119 a year for benefits like one-day shipping, Prime Video, and Prime Music. It is not going to let up on that advantage. Amazon says it spent $1.5 billion on a new one-day shipping Prime service in Q3 2019, with those expenses as a tradeoff for driving sales. After pushing Prime's shipping benefits to one-day delivery, Amazon saw a notable acceleration in retail sales.

Amazon's Prime Membership is turning out to be one of its most powerful tools to keep competitors at bay. Not only that, but benefits like one-day shipping have forced competitors to change their strategy.

The specter of regulation

During the past few years, regulatory restrictions on data have started to bite: the two most notable examples being GDPR in the EU and the CCPA in California.

These two landmark regulations have signaled a crunch point, demonstrating a shifting attitude toward data privacy and consumer rights.

This is just at the time Amazon has rolled out Echo, its smart speaker; acquired Ring, its camera doorbell; and supported dozens of other Alexa-enabled smart appliances. About 70% of people who own smart speakers have Amazon's devices, according to a recent report from Consumer Intelligence Research Partners. The backlash to this market power is growing — with it being labeled as surveillance capitalism. While Amazon has been able to claim its retailing data as a force for good for the consumer, it will have to tread warily when it is accessing private data in the home.

Sellers on Amazon may be entering a golden age of data. With Amazon under pressure to share its information, especially to ward off regulatory pressure, they will have access to more customer data than ever before.

The other key contributor to this golden age is access to Amazon MWS and the advent of third-party analytics software producing  really creative and valuable outcomes with that data. Suddenly calculating customer lifetime value (CLV), tailoring ad strategies and winning the buy box all become within reach. These will be needed because, as Amazon becomes more successful, the contest for customer attention will grow and competition will be fierce. If you want a full guide on how to make sense of your Amazon customer data, we have an eBook just for you.

Looming data scandals in big tech: Is Amazon the next Facebook?